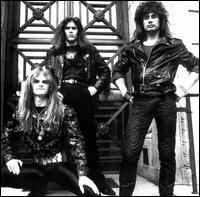 Born out of the ashes of Hellhammer (2) in 1984, Celtic Frost was started by Tom G. Warrior (aka Thomas G. Fischer, Vocals/Guitar) and Martin Eric Ain (Bass). Never ones to keep treading the same ground for long, the band progressed from proto-black metal ("Morbid Tales") to incorporating more classical influences ("To Mega Therion") and then displaying a more avante-garde streak ("Into The Pandemonium"). In 1988, Warrior fronted an new line up (drummer Stephen Priestly, who played on "Morbid Tales" was the only member besides Warrior to have any previous connect to the band) for "Cold Lake". Criticized as "glam metal" by many of the group's fans, the band's creditibilty took a huge hit. Blame was later assigned to guitarist Oliver Amberg, who composed much of the album in place of an allegedly uninterested Tom G. Warrior. Martin Eric Ain returned for 1990's "Vanity/Nemesis", but the group folded shortly after.

In the early 2000's, Warrior (now calling himself Thomas G. Fischer) and Ain regrouped with guitarist Erol Unala and drummer Franco Sesa. Fischer and Ain also revived the Prowling Death Records imprint, which had previously been used to issue the Hellhammer demos. Prowling Death would issue the group's new recordings by licensing them through Century Media, starting with 2006's "Monotheist" (although the Prowling Death imprint is not featured on the release). Erol Unala left the group shortly after the release of "Monotheist".

Although there were plans to follow up "Monotheist", Thomas G. Fischer announced his departure from Celtic Frost in April 2008, citing "the irresolvable, severe erosion of the personal basis so urgently required to collaborate within a band so unique, volatile, and ambitious", although he later stated that his friendship with Ain was still intact.

March 19, 2021
I saw them live on the "Into The Pandemonium" tour with Anthrax (Among the Living-Phase II) and Exodus (Pleasures of the Flesh) tour in 1988!!! You'll never ever see anything like that again!!!