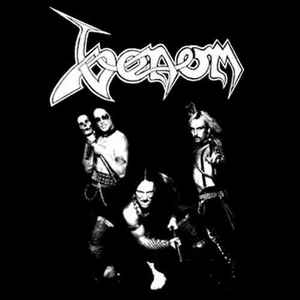 With the release of their second album: Black Metal they gave birth and name to a genre: Black Metal, they also influenced the creation of other Extreme Metal styles such as Thrash, Speed and Death.

* By some, the band is considered to be a part of the NWOBHM movement, but according to Cronos words it wasn’t: "You think back to all those NWOHM bands at the time: They all sounded like someone else, with boring riffs and predictable lyrics. We didn’t want to be part of that, even if it meant people didn't like what we were doing at first, coz it was different".

Early age: Cronos created a band called Dwarfstar more rock / metal than punk and with the first signs of Satanic influences, writing song titles such as 'Sons of Satan', 'Bloodlust' and 'Welcome To Hell' and started incorporating pentagrams and dark satanic imagery.

1979 Conrad Lant a.k.a. Cronos (2) [Titan god from the Greek mythology that ate his children], was working at Impulse Studios in Wallsend he met Jeffrey Dunn a.k.a. Mantas (5). Cronos’s goal was to be in a band that plays original material not covers. He switched from rhythm guitar to bassist because the bassist left and stayed that way. At that time Clive "Jesus Christ" Archer was singer, but he was opposed to Satanism and that got him fired. Cronos tried the vocals and the rest of the band preferred him for singing.

1980 On October 10th, Venom recorded the first 6-track demo that got them signed with Neat Records for their first 7’’ ‘In League With Satan’ / Live Like An Angel - Die Like A Devil. Here it must be said that the initial mix of the tracks was made by a Neat engineer that he didn’t understand Venom’s sound and in result it didn’t really sound like them, so Cronos stole the initial tape and replaced it [before the pressing of the EPs] with one of his own mix!

1981 That same year, the band’s debut album, Welcome To Hell was unleashed [in 3 studio days], it wasn’t a true album but a collection of re-recorded demos with a sleeve, which is why there’s such a huge difference in sound quality between 'Welcome To Hell' and the next album.

1982 Having built a strong fan base among those who worshipped extreme metal, Venom returned [in 7 studio days] with their most important album: Black Metal with their original sound, Cronos shaped it as heavy as it could get.

1984 The band’s first UK live performance on June 1, was at the Hammersmith Odeon in London and became a sold-out event. At War With Satan album is released, idea started off as a story that Cronos wrote while he was still at school. It was going to be a Satanic Bible type idea that I wanted to have published as a novel, and then it turned into a concept album. The difference with other albums is that every song is linked into what went before, after all it was a story turn it into an album.

1996 the band reformed as the original line-up with Cronos back in the fold. A self-titled EP was released, followed by albums and the re-release of all of the bands' older classics.

Cronos (Conrad Lant) is the lead singer of the band, with the exception of Tony Dolan (Demolition Man) that handled vocals on 3 albums:
1989 Prime Evil
1991 Temples of Ice
1992 The Waste Lands
..More line-up changes happened, as Cronos left to follow a solo career [to return later again] and Abaddon was forced to re-recruit Mantas (largely missed by the fans) along with fellow British Atomkraft's Tony Dolan (who used the moniker 'Demolition Man' in Venom) and Al Banes, then, in 2014 former Venom members Mantas and Abaddon decided to start up a new band titled Venom Inc. later on, former Venom member, bassist Tony “Demolition Man” Dolan, was added to the line-up.
The story still goes on with live performances and new albums..

Venom are Black Metal they invented it and they never considered themselves as part of the NWOBHM movement.

July 6, 2022
Why is it called black metal?
The term "black metal" was coined by the English band Venom with their second album Black Metal (1982). Although generally deemed speed metal or thrash metal rather than black metal, the album's lyrics and imagery focused more on anti-Christian and Satanic themes than any before it.

July 6, 2022
I grew up on bands like Venom .they coined the name black metal Sang bout the darker side of life ..countess bathory , possesed , war head .i heard the first time venom were played on radio 1 .mike read said it was called black metal.
Black metal is a subgenre of heavy metal music that typically takes on anti-Christian, satanic and paganistic themes. Black metal songs typically have a fast tempo and feature shrieking vocals, heavily distorted guitars and unconventional song structures

May 21, 2022
Venom is not Black Metal. Black Metal is a specific sub-genre with a specific sound. Venom is NWOBHM/speed metal/proto-thrash. Having lyrics about satan etc. does not make you a black metal band. They may have provided the name of the genre. But are not a Black Metal band themselves. The Black Metal sub-genre sound comes from early Sodom (also not really a black metal band but had the sound that was a huge influence). And bands like Bathory, who if I recall correctly was influenced by Venom and possibly named after one of their songs. Saying Venom is a Black Metal band is like saying Black Sabbath is a thrash band just because they were hugely influential. Or saying Steppenwolf was a heavy metal band because the genre got the name from one of their songs.
See 7 replies

September 12, 2021
Venom ARE Black Metal. They invented the genre. just because the later jokers and Johnny- come- lately's changed the sound to something else and pretended they were the most evil shit on earth doesn't mean anything. The later bands should have thought up their own name /genre.
See 4 replies

January 10, 2020
These gentlemen were considered part of the NWOBHM. But also the founders of Black Metal. I think they fall in between somewhere. They were much more extreme than what the New Wave offered but nothing like modern Black Metal.

Early stuff by this band is ok, hardly accomplished players and very basic heavy metal but it works well. If you're into punk or motorhead you'll like it, or fans of early heavy metal. Compared to metal around today very basic. But they amongst others were the roots for thrash metal and an inspiration for black metal.