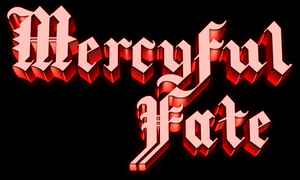 Profile:
Mercyful Fate is a heavy metal band from Copenhagen, Denmark. The band was formed by vocalist King Diamond (2) and guitarist Hank Shermann in 1981. The original MF line-up shared members with another Copenhagen band, Danger Zone, whom Diamond and Shermann were helping out. By 1982, the "classic" Mercyful Fate line up of Diamond, Shermann, guitarist Michael Denner (ex-Brats and Danger Zone), bassist Timi "Grabber" Hansen (Danger Zone), and drummer Kim Ruzz was in place. Over the next couple years, the band would release an EP and 2 LPs that would cement their reputation as one the most influential metal bands of the early 1980s. King Diamond's blasphemous lyrics and theatrical stage presence would have many label the band as part of the 1st wave of black metal, although musically the band was closer to the style of Judas Priest or Iron Maiden. The group split in 1985, as Shermann decided he wanted to pursue a more commercial direction. King Diamond launched a solo career, taking Denner and Hansen with him, while Kim Ruzz disappeared into the regular world.

The band's legend continued to grow after their split. In 1993, the classic line up, minus Kim Ruzz, reformed for a new album, "In The Shadows". Hansen dropped out after that release but the group continued on throughout the 1990s. At the same time, King Diamond kept his own solo career going. Michael Denner left the band after 1996's "Into The Unknown" and Diamond and Sherman continued on with new players. 1999's "9" is, to date, the band's last full-length release. King Diamond has stated that MF has not split up but the band is on hold for the foreseeable future. In 2009, Diamond, Shermann, Denner, Hansen, and drummer Bjarne Holm (who has played with the group since 1994) reunited to re-record the songs "Evil" and "Curse Of The Pharoah" for the "Guitar Hero: Metallica" video game.

In 2019, the group announced they would be playing a series of live dates. The line up would include Diamond, Sherman, Wead, Holm, and bassist Joey Vera (filling in for Timi Hansen, who was battling cancer). Timi Hansen lost his battle with cancer on November 4th, 2019.

June 7, 2022
one of the best Metal bands on earth ever. classic
Reply Notify me Helpful

January 21, 2017
I bought a vinyl supposed to be "drunken in Stonehenge" of the band Queens of the Stoneage but while listening I had to find out it was NOT the band! After searching what appeared to be an eternity I finally found the band "mercyful fate". It's a live recording from Brazil (maybe from 1996!?)! More research explained there is no such Album with this particular playlist:
A1 ?
A2 Angel of Light
A3 Egypt
A4 curse of the pharaohs
A5 Doomed by the living dead
A6 the uninvited guest
B1 the bellwether
B2 satan's Fall
B3 ?
B4 come to the sabbath
B5 black funeral

I think it's the album "no mercy for the fallen" but I got a mispress ;)