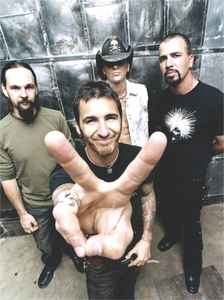 Godsmack has sold over 10 million albums in the United States with an additional two million worldwide, including over 2 million singles sales worldwide. The band has had two number one albums (Faceless and IV) on the Billboard 200. They have had a record-breaking fifteen top ten mainstream rock singles, a debut album selling over five million copies in just two years and have also been nominated for three Grammy Awards. The band has sold almost 17 million albums, singles, DVD's and compilation CD's, making them one of the most successful modern rock bands.
Sites:
godsmack.com, Wikipedia
Aliases:
The Scam (11)
Members:
Joe D'Arco, Lee Richards, Robbie Merrill, Shannon Larkin, Sully Erna, Tommy Stewart, Tony Rombola
Variations:
Viewing All | Godsmack
Goodsmack, ゴッドスマック

Overall i'd give Godsmack a rating, their first three albums combined, of 3/5 - which if you look at my profile is an average rating, but its unlikely i would tell my friends to listen to them. Why because they are using a sound that was overused, and still today is very mainstream. So dont listen to Godsmack if you're looking for something different because you won't find it, but do give them a listen if your a fan of Alternative Metal or Grunge. Even hard rock fans, like myself, would happily listen to this album. The best album out of the first three would have to be Faceless, purely because it has the best sound and is a bit different to their original sound.