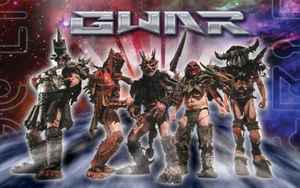 Profile:
GWAR is a band/artist group that formed in 1982 as Death Piggy and changed the name to Gwar in 1984. The group of art students from Richmond, Virginia has played a variety of musical styles including punk, hard rock, thrash and heavy metal. They also design and create their own elaborate costumes, props, sets and characters to go along with their stage shows and movies.

The bands fictional back story is:
For millions of years, the mythical galactic monsters of GWAR lay frozen in an iceberg in Antarctica. But in the 1980, glam rock was at its peak, groups like Poison and Whitesnake were dominating the airwaves. They inspired a whole slew of new "hair spray" bands. But little did they know, all of that hair spray put a hole in the ozone - right above Antarctica! Soon the unfiltered gamma rays melted the iceberg and GWAR was free.