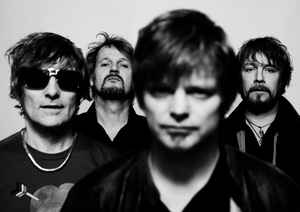 Profile:
One of Norway's most popular rock bands, DumDum Boys (who took their name from an Iggy Pop song) emerged in the wake of short-lived, but legendary punk band Wannskrækk. DumDum Boys' debut album Blodig Alvor (Na Na Na Na Na) (1988), with its mixture of basic rock'n'roll and Kjartan Kristiansen's well-written Norwegian lyrics, became an instant hit, and follow-up Splitter Pine (1989) is their biggest-selling record, the title track being their most well-known song. The band continued to release music throughout most of the 1990's, and although record sales declined somewhat, they remained an extremely popular live band. In March 2006, they returned after an eight-year break with the album Gravitasjon.