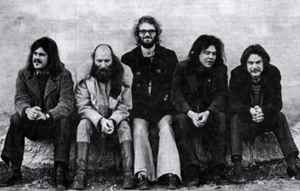 Real Name:
Arbete & fritid
Profile:
Arbete och fritid (Arbete & fritid / Arbeteåfritid, meaning Work And Leisure) was a 1970s Swedish Folk, Jazz, Prog and Rock group that emanated from Jazz Quartet Roland Keijsers Kvartett in 1969. They were an extremely influential and seminal band; a meeting point for musicians from many other bands before and after, especially as a link between Harvester and Archimedes Badkar. Early recordings cross-bred traditional Swedish folk themes with systemic and contemporary styles, with vaguely rock rhythms and jazz instruments, as well as a good portion of humour. They were never easy to classify, running through many styles, encompassing melody, fury and dissonance, through to almost straight folk, and all other bases.

They also recorded albums with other musicians, sometimes in collaboration or just as the backing band, played at folk, jazz and rock festivals. Their final album Håll Andan ("Hold Your Breath") from 1979 was a no-holds-barred exploration in innovation, pushing the envolope in a manner similar to Faust. In 1981 they called it quits, but all the musicians in Arbete och fritid have gone on to other projects, and many are still active 30+ years on.
Sites:
Wikipedia
Members:
Bengt Berger, Bosse Skoglund, Jan Zetterqvist, Kjell Westling, Ove Karlsson, Roland Keijser, Thomas Gartz, Torbjörn Abelli, Tord Bengtsson, Torsten Eckerman, Ulf Lauthers
Variations:
Viewing All | Arbete Och Fritid
A & F:t, A&F, AFT, Arbe Och Fritid, Arbete & Frited, Arbete & Fritid, Arbete Å Fritid

February 17, 2014
These are one of the most unusual lands you are likely to come across in Europe. Their music is impossible to categorise as they cover such a large area, ranging from Heavy Metal through to Cosmic dirges to strange arrangements of traditional folk melodies. Their first release for the MNW label is made up of these strange folky melodies. They seem to be able to do things to folk tunes like Popol Vuh do to Indian ragas. UR SPAR is a different kettle of fish, being one complete work recorded live in concert, it's a kind of minimalistic excursion with the strange instrumentation of violin, trumpets, bass, cello, guitars and percussion. Their most satisfying work is SE UPP FOR LIVET, a double album. This album is more diverse, delving deep into cosmic music at times and also into the minimalistic area explored by Tony Conrad and Faust, and of course the occasional Heavy Metal and Folky tracks. A warning must be given for the album SEN DANSAR VI UT as this is nothing like the other platters, being very straight renditions of traditional folk tunes - a bit like the Chieftains?
by Alan & Steve Freeman, first published in Neumusik, issue 5 (August 1981)
Reply Notify me 5 Helpful