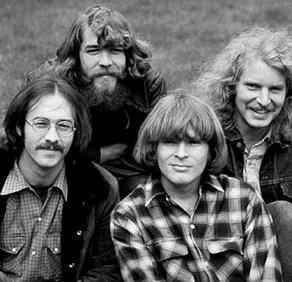 John Fogerty, Stu Cook, and Doug Clifford initially joined forces in 1959 as The Blue Velvets and later backed John's older brother, Tom, as Tommy Fogerty and the Blue Velvets. The group later changed their name to the Golliwogs and released several unsuccessful singles. In 1967, they changed their name to Creedence Clearwater Revival and John Fogerty took total control of the group. CCR was extremely prolific, releasing 6 albums and various singles between 1968 and 1970. However, the other members of the band chafed under John Fogerty's domination and in 1971 it was announced that Tom Fogerty had left the band. CCR made one more album, 1972's "Mardi Gras", as a trio. In the wake of Tom's departure, John, responding the other members' requests to have more say in band matters, stipulated that both Cook and Clifford had to contribute equally to the writing and recording. The album was poorly received and CCR subsequently split.

August 22, 2020
I think Todd In The Shadows on Youtube said it best:
Creedence was the band for everyone, whether you were a hippie or a redneck. Their songs are timeless.