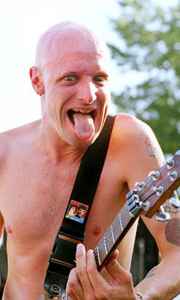 Real Name:
Stephen Patrick O'Reilly
Profile:
Stephen Egerton is the guitarist for Descendents and ALL. He runs Armstrong Recording in Tulsa, Oklahoma.

In 2006, Egerton began recording for a new project called 40 Engine featuring former ALL vocalist Scott Reynolds. To date, recordings of only 2 songs have been made public. They have performed live only once in Tulsa, Oklahoma in August 2006.