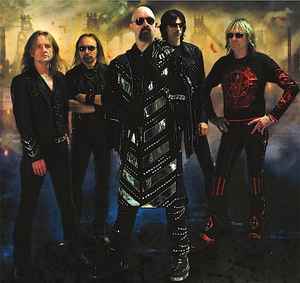 The band was formed in Birmingham, England in 1969 by guitarist John Perry (who died shortly after and was replaced by Ernie Chataway), bassist Bruno Stapenhill, drummer John Partridge (2), and singer Al Atkins, who created a band name from Bob Dylan's song 'The Ballad Of Frankie Lee And Judas Priest'. In 1970, guitarist Kenneth K. K. Downing and bassist Ian Hill (2) joined, replacing Chataway and Stapenhill. Drummers John Ellis and Chris Campbell (30) replaced Partridge. Later, in 1973, Rob Halford and drummer John Hinch joined to replace Atkins and Campbell, respectively. A song from the last show with Atkins and Campbell and three from Halford and Hinch's first were released in 2019 on the compilation Downer-Rock Asylum. A second guitarist, Glenn Tipton, was also added to the line-up in 1974.

The line-up featuring Halford, Downing, Tipton and Hill existed between 1974 and 1990. Priest went through a number of drummers (Hinch, Alan Moore, Simon Phillips and Les Binks) between its formation and 1980 when Trapeze drummer Dave Holland (2) joined and stayed until 1988. In early 1990 Racer X drummer Scott Travis joined the band. In mid 1990 the band was taken to court over the attempted suicide of two young boys in Reno, allegedly driven by subliminal messages on its Stained Class album. The case was eventually thrown out of court.

The 2011 Japanese CDs don't have the same sound as the 2001 Astley versions. Unfortunately, these 2011 reissues were remastered from the 80s/90s Japanese CDs. Both the old and 2011 editions of each title stay in sync with each other and have very similar, if not identical EQ. The only exception is Priest Live, which was remastered from the Astley version (probably because the old version had only 1 disc). The bonus tracks sound identical to the regular remasters.

September 8, 2013
Buyers beware! The remastered versions of the classic Priest albums are BAD. The production is horrible, everything is compressed and brickwalled. Do yourself a favor and buy only pre-2001 versions of their albums.
See 18 replies