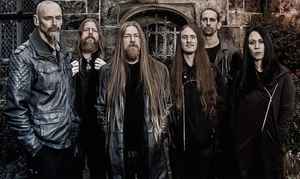 Profile:
British doom band, formed sometime in 1990 as some "slower-than-usual" death metal act by Calvin Robertshaw (guitars), Aaron Stainthorpe (vocals), Andrew Craighan (guitars) and Rick Miah (drums). What they played was soon to become the first example of the second wave of doom metal, which mixed elements of other uber-heavy genres such as death and black metal.

"Towards The Sinister" was the band's first recording ever, an early demo which immediately got them a deal for their first real release, the classic EP "Symphonaire Infernus Et Spera Empyrium". "As the Flower Withers", the band's very first full length, followed in 1992, allowing the group to gain more popularity. "Turn Loose The Swans" and "The Angel And The Dark River" (released in 1994 and 1996 respectively) followed the original album's success, but took the band's style further, mixing all sorts of different musical styles together.

Despite My Dying Bride's quite evident commercial success the band never stopped experimenting (1998's "34.788%...Complete" demonstrating this more than any other release) and has now settled with it's own original style which differs quite a lot from other band's, even though it has given birth to many pioneers (and some say a whole subgenre!).