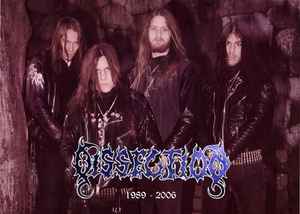 Profile:
A metal band from Strömstad, Sweden, founded in 1989 by Jon Nödtveidt and Peter Palmdahl. Relocated to Gothenburg in 1993 and to Stockholm in 2003.

In December 1997 the band was put on a permanent halt as Nödtveidt was arrested for killing a man earlier that year. He was later sentenced to 10 years in prison for assistance to murder and illegal possession of a firearm.

In 2003 Nödtveidt announced the comeback of Dissection and the renewed band eventually returned to the stage on October 30th, 2004 at the Arenan in Stockholm. Soon after the release of their third album “Reinkaos” on April 30th, 2006, Nödveidt announced the end of Dissection as he “had reached the limitations of music as a tool for expression and with Reinkaos they had managed to manifest a truly Satanic record and the work of Dissection had been done. Now it was time to move on to other realms of practice.” Their final concert was performed on June 24th, 2006 at Hovet, Stockholm. About two months later, on August 13th, 2006, Jon Nödtveidt committed suicide.

Music-wise, Dissection combined various styles of extreme metal with a strong melodic sensibility and a sinister/melancholic atmosphere. Despite often being considered death/black metal, the band themselves refused such categorization and typically referred to their music as Metal of Death, or Anti Cosmic Metal of Death.