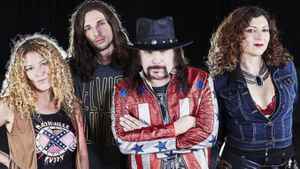 Profile:
Nashville Pussy is an American hard rock band from Atlanta, Georgia. Many of their songs are about sex, drugs, drinking, fighting, and rock & roll. Their musical style mixes hard rock, punk rock, Southern metal and psychobilly. Much of their music is not what would be considered traditionally "radio friendly", due to their frequent use of expletives and vulgar terminology. Initially called Hell's Half-Acre, the band's name comes from Ted Nugent's introduction to "Wang Dang Sweet Poontang" on the Double Live Gonzo album.

The core lineup of Nashville Pussy consists of husband-and-wife duo Blaine Cartwright and Ruyter Suys (pronounced "Rider Sighs"), and drummer Jeremy Thompson. Original bassist Corey Parks (sister of former NBA basketball player Cherokee Parks) left after the album High as Hell, to be replaced by Katielyn Campbell (of the band C'mon) for the album Say Something Nasty. Campbell was subsequently replaced by Karen Cuda for the album Get Some.

September 8, 2020
I have a cd in my collection by nashville pussy titled 'tastes just like chicken'. it's a bootleg but it rocks! i have no idea when or where this live recording was made. anyone?