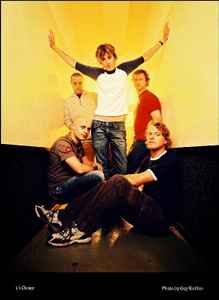 Profile:
Since the late eighties, brother and sister Gert and Sarah (now Sam) Bettens have been active in the Belgian music scene. Whilst studying, they formed their own "hobby-band" called "The Basement Plugs", and predominantly covered popular songs in the Antwerp area.
In 1992 Sarah’s voice was "discovered" and she released a solo single under the name "Sara Beth". The single faired well in the Belgian charts, and the record company Double T Music offered her a contract for a full album. Gert joined Sarah for a trial acoustic session, and hence "The Choice" was born. In October 1993, their first full CD "The Great Subconscious Club" was presented to the press.
In 1994 succes was increasing, in Europe as well as in the USA. In the USA a band called "The Choice" claimed they had rights over the name; to avoid confusion and potential lawsuits, Sarah and Gert decided to change the bandname to "K's Choice". The "K" is taken from Jozef K, the key protagonist in Kafka's "The Trial" who ironically, is continually confronted with situations where he has limited choices.
In the autumn of 1995, "Paradise in Me", the band's second studio album, was released. The album was heavier and more guitar-orientated than the debut "The Great Subconscious Club".
The band released 4 studio albums prior to 2001. In 2002 they went on a break, pursuing soloprojects.
One decade after their last album the band released their fifth studio album "Echo Mountain" in 2010.
In 2015 en 2016 the 6th and 7th studio albums were released. "The Backpack Sessions" is a compilation of accoustic renderings of old songs and some covers.
The last studio album "Love = Music" dates from 2018.
Sites:
kschoice.com, Wikipedia, houbi.com
Members:
Bart Van Der Zeeuw, Eric Grossman, Gert Bettens, Jan Van Sichem Jr., Koen Victor Lieckens, Sarah Bettens
Variations:
Viewing All | K's Choice
The Choice, The Choice (K's Choice)