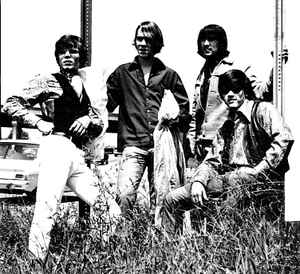 Profile:
We the People were an American garage rock band from Orlando, Florida that were formed in late 1965 and professionally active between 1966 and 1970.
Although none of their singles charted nationally in the U.S., a number of them did reach the Top 10 of the local Orlando charts. The band are perhaps best remembered for their song "Mirror of Your Mind" which reached the Top 10 in a number of regional singles charts across the U.S. during 1966.

From an interview with Wayne Proctor
"In 1965, I was in another band based out of Clermont, Florida, called the The Trademarks (2) , along with Randy Boyte, our keyboard player and singer. During that same time, David Duff, Tommy Talton, and Tom Wynn, were in a band in Orlando, Florida, called the Offbeets. Both bands had the same manager as the Trademarks, and he suggested that Randy and I meet with the three members of the The Offbeets , to possibly form a new band. We followed up on that suggestion, met with Duff, Talton, and Wynn, and we all decided it was a good match for the times. During one of our first meetings in the Jungle Auto Parts Garage in Leesburg, Florida, (Randy’s dad owned the Jungle Auto Garage where we practiced), we were discussing a name for our newly formed band.

I remember everyone suggesting various names for the band, when I noticed a copy of the preamble to the United States Constitution hanging on the office wall. It read in part, “We the People of the United States, in order to form a more perfect Union, establish Justice, insure domestic Tranquility, provide for the common defense, promote the general Welfare, and secure the Blessings of Liberty to ourselves and our Posterity, do ordain and establish this Constitution for the United States of America.”

When I silently read the first sentence to myself, I then uttered out loud, “We the People!” Our manager and the guys loved it. And, so it was….."
Sites:
southerngaragebands.com, Wikipedia, allmusic.com, home.unet.nl, 50thirdand3rd.com
Members:
David Duff, Lee Ferguson, Randy Boyte, Tommy Talton, Tommy Wynn (2), Wayne Proctor
Variations:
Viewing All | We The People (2)
One Is (We The People), We The People...