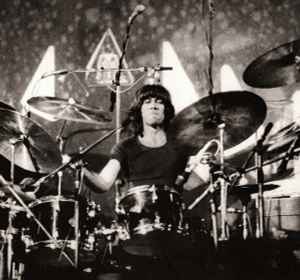 Profile:
Christian Vander (born February 21, 1948) is a French drummer, musician, and founder of the band Magma (6). Besides his work with Magma, he has also founded Offering (which saw him put away the drumsticks and focus on the vocals), a self titled jazz trio/quartet, and two fusion bands Fusion (29) and Alien (34). All these bands featured Magma alumni. In 2012 he started also to perform solo.
He is known both for his unique songwriting, virtuosic drumming, and shrill falsetto improvisational/scat singing. His compositions fuse jazz, rock, classical and opera influences, and draw on the work of musicians as diverse as John Coltrane and Carl Orff. Vander's music in Magma is broadly classified as Progressive rock, but the style is so unique that it falls under its own category - an idiosyncratic style of music that Vander himself calls “Zeuhl”. For Magma he devised also a new language known as Kobaïan.

He is – together with his first wife Stella Vander - co-founder of the label Seventh Records.