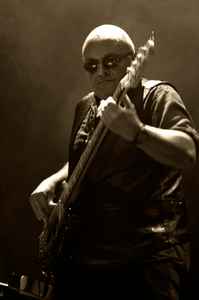 Jannick Top took academic music lessons at the end of the 1960s, studying piano and cello. At the age of 16 he won first prize for piano and first prize for cello. Following a proposition of a bassist friend to replace him for a session with a region’s leading orchestra, he took up electric bass for the first time, and was hooked by the instrument.
He had the idea of ​​adapting his cellist playing on a bass guitar by tuning his bass from fifth to fifth, like a cello. By doing so, he overturned the methodology, the practice and the sound of the instrument. It is this enormous, unforgettable and recognizable sound that will forever be his signature.

His meeting with André Ceccarelli in 1971 led to the formation of the group Troc. In 1973, the band recorded an album and performed in Paris. This is where Jannick met Christian Vander, drummer, composer and leader of Magma (6), which Top was invited to join straight away.
Jannick stayed with Magma for 2 years, playing nearly 200 concerts in France, Europe, and the USA. He left after Summer 1974 exhausted by the tough life on the road and the financial insecurity of the group.
He joined Magma again in 1976 in an attempt to lead the band at equal level with Vander (the “Vandertop” period) but this proved short-lived, although artistically one of the most intense and highly successful period for Magma, whose trademark sound was for ever influenced by Top’s contribution.

At this period, he declared in a music newspaper that he had to find a “non-musical” job to earn a living, revealing that he was doing studio sessions for known or less-known artists of French varieté. This activity would prove to be rewarding for Top, and he must have found some “musical” satisfaction to do it, since it took him away from his own music for 20 years — if you put aside the short-lived jazz-fusion quartet (Fusion (29)) he formed with his former Magma friends in 1981. Top became one of the more sought after session player in France, playing and arranging music for hundreds of French and international rock, jazz and pop stars like Céline Dion, Francis Cabrel, Véronique Sanson, Ute Lemper, Michel Jonasz, Françoise Hardy, Bonnie Tyler, Jeanne Moreau, Eurythmics, Jacques Dutronc, Bernard Lavilliers to name only a few. He was also the dedicated bassist, arranger and musical director for France Gall and Michel Berger (until his death in 1992), and for French rock icon Johnny Halliday during ten years.
In parallel to these sessions and live works, he started a collaboration with pianist Serge Perathoner, composing and producing score music for films, TV and advertising. Together they created the company Piano Bass Music.
Only in 1996 did Jannick Top return to his roots and his own “telluric” music, as he calls it, with the trio STS (6). Since then he managed to issue his own music irregularly, playing a lot with his bandmate André Ceccarelli in several bands (Ligne Sud Trio, the reformed Troc…) while releasing his first proper solo album ("Infernal Machina"), as well as archives under his own label Utopic Records.
Sites:
jannicktop.com, Wikipedia
Aliases:
Samy Wathson, Wahrgenuhr Reugehlem Esteh
In Groups:
European Music Authority, Fusion (29), Les Enfoirés, Ligne Sud Trio, M.B. School, Magma (6), Rosebud, Space, Speed Limit (8), STS (6), Troc, Utopic Sporadic Orchestra, Vandertop
Variations:
Viewing All | Jannick Top
J. Pop, J. Top, J. Topp, J.Top, Janic Top, Janick "Epoustouflant" Top, Janick "Killer" Top, Janick Top, Janik Top, Jannic Top, Jannick Tope, Jannik Top, Jannyck Top, Jeanick Top, Top, Top, J., Y. Top, Y.Top, Yanick Top, Yanik Top, Yannick Top, Yannik Top, Жаник Топ