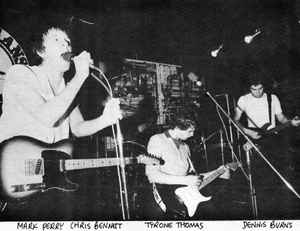 Profile:
In March 1977, Alternative TV were formed by Mark Perry (vocals/guitar) with guitarist, Alex Fergusson. ATV played their first gig at the Nottingham Punk Festival in May 1977. Following various line-up changes, their first album was released in May 1978.

December 24, 2011
I have "love lies limp" on single sided floppy disc as given away with "sniffin'" glue. Plays brilliantly no hiss or scratch Worth?
Tim