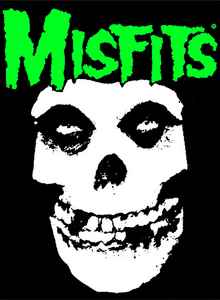 Profile:
The Misfits are an American horror-themed punk rock band from Lodi, New Jersey. Formed in early 1977, they took the band name from Marilyn Monroe's last film and in fact, thanked the cast of the movie on the back of their first record. The founding members were: Glenn Danzig on vocals and electric piano, Jerry Caiafa (Jerry Only) on bass, and Manny on drums. Their first release on their own label, Blank Records, didn't reflect the characteristic anger and rebellion of most "punk" records, but instead a more brooding and sinister, yet romantic side lingering beneath. Following the single, Danzig and Only recruited a new drummer and added a guitar player and pursued the horror-based punk rock direction that they are known for. Danzig and Only presided over several line up changes, eventually culminating with Jerry's younger brother, Paul (aka Doyle) becoming the band's permanent guitarist.

The original Misfits broke up in October 1983, having released several 7" singles and 12" records, all of which were DIY limited-edition and most of which were hand-assembled by the band, that have long been considered prime collectors' items. The bulk of the band's material was released on Glenn's Plan 9 label. The band's popularity grew exponentially following their split and their material and tapes of their live shows were heavily bootlegged.

Following the Misfits' dissolution, Danzig formed a new band called Samhain while Jerry Only and Doyle, heavily in debt to their father over band expenses, stepped away from music to work full time jobs at their father's company. Between 1986 and 1988, Glenn continued to issue unreleased and out of print Misfits material. Some of the songs on these collections featured guitar and bass tracks re-recorded by Glenn while others were all new recordings of old songs performed by Glenn and his Samhain bandmate Eerie Von. These collections were released by Plan 9 records. Jerry Only eventually contacted Danzig about royalties from these releases which resulted in a lawsuit between the two. In 1995, an out of court settlement was reached that gave Only the rights to the Misfits name while Glenn maintained control of the publishing for the band's old material and the Plan 9 label was terminated.

Jerry Only and Doyle reformed The Misfits in 1995, recruiting Michale Graves on vocals and Dr. Chud on drums. The new incarnation of the Misfits released two full-length albums, "American Psycho" and "Famous Monsters" as well as a collection of rare and unreleased "resurrected" Misfits tracks, until Michale Graves and Dr. Chud left the band on October 25, 2000 at a performance at the House of Blues in Orlando. Doyle went on "indefinite hiatus" from the band, later stating he was frustrated with decisions that his brother had made regarding the band. In 2004, Doyle reconnected with Glenn Danzig and has periodically made live appearances with Glenn to perform Misfits tunes. Meanwhile, Jerry Only took over the vocalist spot in the Misfits while recruiting former Black Flag vocalist Dez Cadena to play guitar and Marky Ramone for the drums. Ramone eventually left and was replaced by former Misfits and Black Flag drummer Robo, who was later replaced by Eric "Chupacabra" Arce. In 2001, Only and associate John Cafiero set up Misfits Records to release new material by the band. After releasing an album of cover tunes in 2003, the Only-fronted line up released it's first album of original tunes in 2011 entitled The Devil's Rain. Alive album, DeA.D. Alive was released through Misfits Records in 2013 featuring songs from Graves/Jerry Era Misfits as well as a cover from Rocky Horror Picture Show. Several EPs were released in the following years including Horror Xmas, Vampire Girl, and Friday The 13th. In 2016, Glenn Danzig and Doyle would reunite with Jerry Only and would perform two shows for the first time since 1983 at Riot Fest in Denver, Colorado and Chicago, Illinois. The Event flyer read, "They Said It Would Never Happen... The Original Misfits."
Sites:
misfits.com, misfitscentral.com, onethirtyeight.com, Facebook, Twitter, MySpace, Wikipedia, fiendcollectors.com, instagram.com
Members:
Acey Slade, Arthur Googy, Bobby Steele, Brian Keats, Dave Lombardo, David Calabrese, Dez Cadena, Eric "Goat" Arce, Frank LiCata, Glenn Anzalone, Jerry Caiafa, Jerry Caiafa II, Jim Catania, Joey Image, Kenneth Schalk, Manny, Marc Bell, Marc Rizzo, Michael Emanuel, Myke Hideous, Paul Caiafa, Roberto Valverde, Zoli Teglas
Variations:
Viewing All | Misfits
Mestres Misfits, Misfits, The, The Misfits, The みすふぃっつ, The未酢不ぃっ津, misfits, the, the Misfits, みすふぃっつ, 未酢不ぃっ津

August 23, 2019
For those of you wanting to get into the Misfits the best place to start is the self-titled compilation (aka Collection I) and Collection II. Between the 2 albums you get a great understanding of why they got popular in the first place and remained so to this day. These albums are also rather easy to find and rather cheap, best bang for you buck.
See 8 replies