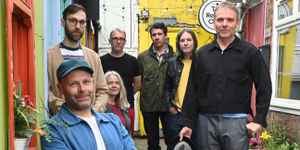 "Belle et Sébastien" is a novel by Cécile Aubry about a boy (Sébastien) and his Pyrénées mountain dog (Belle). The novel became famous and a popular children's television series in France in the late-1960s, and then internationally in the early-1970s.

In October 2014 the band reissued all 11 of their releases, up to that point, under the series heading "It Could Have Been A Brilliant Career", taken from the song with the same name that appeared on The Boy With The Arab Strap.
Sites:
belleandsebastian.com, MySpace, Wikipedia, Facebook, Twitter, instagram.com, YouTube
Members:
Bob Kildea, Chris Geddes, Dave McGowan, Isobel Campbell, Mick Cooke, Richard Colburn, Sarah Martin (2), Stevie Jackson, Stuart David, Stuart Murdoch
Variations:
Viewing All | Belle & Sebastian
B&S, Bell And Sebastian, Belle + Sebastian, Belle And Sebastian, Belle and Sebastian

August 24, 2020
Does anyone have information on the Glasgow Live 2015 as a gatefold vinyl release? I’d already bought the triple CD (which is listed) and I ordered a copy to also receive a signed photo available to the first 100

Never received a copy but I wondered if any vinyl versions were actually released?

The CD and vinyl releases were made by Concert Live who have gone out of business. I do have original email and image of the proposed vinyl release

March 1, 2018
is there any way to make TigerMilk appear first, since it is their debut album.
Reply  See 2 replies Notify me 9 Helpful