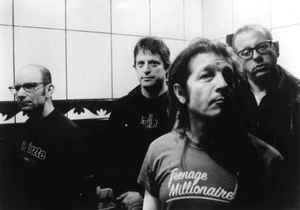 Profile:
The Circle Jerks are an American punk rock band formed in 1979 by vocalist Keith Morris and guitarist Greg Hetson. Morris had previously been a vocalist for Black Flag and Hetson had been a guitarist for Red Cross (later known as Redd Kross). Both bands practiced at a rehearsal space called The Church, located in Hermosa Beach, California. Morris and Hetson quit their bands at about the same time, but for opposite reasons: Morris felt Black Flag practiced too much and Hetson felt Red Cross didn't practice enough. The duo recruit jazz-trained drummer Keith "Lucky" Lehrer. Lehrer had auditioned for Red Cross but had been rejected by the other members of the band for allegedly being "too good", much to Hetson's frustration (Red Cross's previous drummer, Ron Reyes, ended up replacing Morris in Black Flag). Bassist Roger Rogerson (born Roger Dowding) was the final addition to the band. The Circle Jerks quickly rose in popularity due to their hyperspeed music and energetic performances, but their habit of re-using music and lyrics from their previous groups (sometimes including bits that the members of the Circle Jerks did not author) did not win them many fans among their former band mates. Their debut release, 1980's "Group Sex" featured 14 songs in 16 minutes and is considered a classic.

During the recording of their 3rd LP, "Golden Shower Of Hits", Lucky Lehrer was fired from the group because his enrollment in law school was seen as an obstacle for the band's plans. Rogerson brought John Ingram, a high school friend, to replace Lehrer without consulting any of his band mates and the union proved to be short-lived. The band then recruited drummer Chuck Biscuits (formerly of D.O.A. (2) and Black Flag) and bassist Earl Liberty (formerly of Saccharine Trust), with Rogerson temporarily playing 2nd guitar before leaving the band in the midst of a tour. This line up toured into 1984 and made a cameo in the movie "Repo Man" before the rhythm section departed. 1985's "Wonderful" featured bassist Zander Schloss (who also had a role in "Repo Man") and drummer Keith "Adolph" Clark. This line up also recorded the band's 5th LP, the oddly named "VI" in 1987. The band toured for the next few years but by this time Hetson had joined Bad Religion, which occupied more of his time, and by 1990 the Circle Jerks ceased activity.

In 1994 Morris, Hetson, Schloss, and Clark reunited and recorded "Oddities, Abnormalities, and Curiosities" and toured into 1995 before again calling it quits. IN 1996, Lehrer and Rogerson approached Morris and Hetson about reuniting the original line-up. Morris stated that he and Hetson had no intentions of pursuing that action but Hetson agreed to meet with his former rhythm section at Lehrer's home for a jam session. Rogerson, the reunion's primary instigator, failed to appear. A few days later he was found dead from a heroin overdose. In 2001, Morris, Hetson, and Schloss reunited again, this time with new drummer Kevin Fitzgerald. This line-up made numerous live appearances. In 2010, the group attempted to record new material with producer Dmitri Coats. Morris soon found himself at odds with the rest of the group over the choice of producer, who was working closely with Morris but rejecting much of the material submitted by the rest of the band. The group opted to fire Coats so Morris quit the group and formed OFF! with Coats, leaving the Circle Jerks in a state of hiatus.
Sites:
circlejerks.net, Facebook, instagram.com, Twitter, Wikipedia
Members:
Charles Montgomery (3), Greg Hetson, Joey Castillo, John Ingram (2), Keith Clark (2), Keith Lehrer, Keith Morris, Kevin Fitzgerald, Mark Vidal, Roger Dowding, Zander Schloss
Variations:
Viewing All | Circle Jerks
C. Jerks, The Circle Jerks