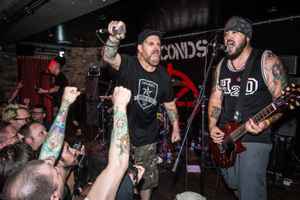 Profile:
Punk band originally from Reno, Nevada, formed in 1980 by vocalist (and some time guitarist) Kevin Seconds and his brother, bassist Steve Youth.
Drummer Troy Mowat joined in 1983 and these three have made up the core of the band ever since.

The band started out playing hardcore punk but have changed their sound throughout the years, touching on emo-core, alternative rock, and pop-punk.