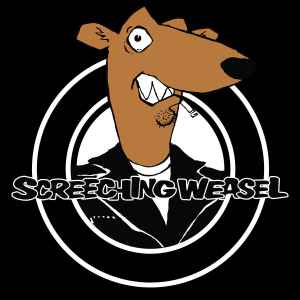 The band was initially founded as a trio featuring vocalist Ben Weasel (also playing bass at the time), guitarist Jughead, and drummer Steve Cheese. The group first called itself All-Night Garage Sale, but changed their name to Screeching Weasel after bassist Vinnie Bovine joined in December 1986. Bovine would be fired in January 1988. It would be the first of a number of line up changes that would affect the group's rhythm section throughout its lifespan. Bassist Danny Vapid joined the group in 1989 (he was called Sewercap at the time). The band split at the end of that year but reformed in 1991, at which time drummer Dan Panic joined the group.

Although the group's line-up continued to fluctuate (upon the 1991 reformation, Vapid would move to 2nd guitar and remain there until moving back to bass in 1993; three bassists passed through the band during that time), the line up of Weasel/Jughead/Vapid/Panic is considered "classic" by most Screeching Weasel fans. The band split again in 1994 but reformed in 1996. Vapid and Panic left the group for good the following year. The bass position was filled by the band's longtime friend and Squirtgun member Mass Giorgini, who had also recorded and produced a number of the group's releases. Dan Lumley (also of Squirtgun) took over on drums and Zac Damon joined on 2nd guitar. Damon left the band in 1998 but was not replaced until 2000, when Phillip Hill (Teen Idols) joined the group. Although the band continued to record and release music at this time, the band did not play a single live show from late 1993 until mid 2000.

Screeching Weasel split again in 2001, mainly due to Jughead's frustration with Ben Weasel's refusal to tour. In 2004, a line up of Weasel/Jughead/Vapid/Giorgini/Lumley played some unannounced live shows around Chicago.

artist's by rujluelma
Artists I Have Seen Live by DrSilence
“The Encyclopedia Of Punk” by crimsonmetal74
Bands In My Collection - S by TragicVision504
Favorites by BRXAN
Ulubieni artyści ;) by jan_marian
Post 90s Punk Rock Bands by BAHAMABOY
Bands that sound like the Ramones by BAHAMABOY
Artists in My LP Collection by sillypenta
Cool Bands & Solo Artists by SimoniousC
Bands: Music I Have Seen Live by tekkno-guy
View More Lists →