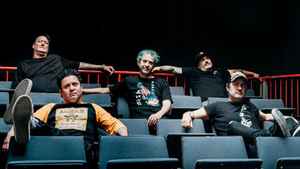 Profile:
American punk rock band originally named Section VIII (3) from Goleta, just outside Santa Barbara, California. Their name comes from the band's old tour van, which can been seen on the back cover of the album Trashed. The band went on hiatus around 2000 and reunited in 2002.

December 31, 2020
The albums with Derrick Plourde on drums and Sean Dewey on guitar (3 first LP's, including the 2 demos that were included in the re-release of their debut "Duh") is the best representation of the birth of melodic hardcore punk. Bad Religion when they came back in 88 did it too, but in a different manner, Lagwagon weren't shy of metal level skills on guitar with the dual riff machines that Chris Flippin and Sean Dewey were and the infinitely talented Derrick Plourde and of course Joey and Buglione (bass riffs that stick in your head, think "Rust", "Sleep", many other filling licks in almost all songs. They were the seminal band that so many now forgotten bands, a lot who were on Fat (not the great first batch of bands obviously, Propagandhi (on a league on their own too), Strung Out, No Use For A Name when they joined after leaving New Red Archive probably put out their best outing ever then (The Daily Grind) and a few others), tried to pose as, but diluting the sound ever poppier. Blink-182 back then naming them and Propagandhi and Pennywise, NUFAN as influences was kind of a joke to me, even the other kids then who were in love with "Chesire Cat" by Blink, I thought was meh, but they only got worse every album. Some bands who started as skatecore bands in the vein of The Faction like Rhythm Collision even followed that trend. I do not fault Lagwagon at all for this, but something happened around 95 when Plourde and Dewey left and they were touring with Blink-182 and other Green Day type of pseudo-pop-punk bands did a great disservice to the band....to many when they hear the name "Lagwagon" they think "pop punk" which is so damn incorrect, yes, they could do funny poppy songs, but they weren't the majority of their sound, and the strange album "Double Plaidinum" that was released with a rent-a-guitarist in place of Dewey and the strange bad production...and then the overpolished/produced Let's Talk About Feelings (which I still give 3 stars out of 5), I didn't know if they were going to be a seminal legendary band someday had they continued in the direction they were after putting two 5/5 albums in a row in 94 and 95, but thankfully, they found back their sound with the larger contribution of the newly added Rich Kids On LSD (RKL) hardcore punk/punk'n'roll member Chris Rest to replace Dewey on a permanent basis. From Blaze and to this day, if Railer is their swan song as some of the song lyrics might indicate, they are what every kid in 1995 who was into the whole skate punk/melodic hardcore thing dreamt of becoming. The members themselves would never talk about their band as seriously as I am doing and I'm aware of it, but, you guys rule, and I hope you managed to stop the smokes Joey, your voice is so great and versatile, when I heard him sounding like on "Trashed" on their 2014 LP "Hang", I was wowed, get a vape if the patches and the nicotine gum fails you buddy. Wouldn't want to see him struggling live when we get rid of this damn air AIDS, which it seems, just a tip from the med world, by summer 2021, the virus will go H1N1 and all those vaccines will end up like the H1N1 vaccines. This is relevant, this band warned us in the song "No Little Pill".

Alright, happy 2021 to this band, I hope they will re-emerge, they are, at least some of them, younger than some of their contemporaries who were still going by jan-feb of 2020, there's no way it could get any worse, I think. I hope the creators of that virus "choke on them" ;)
See 2 replies