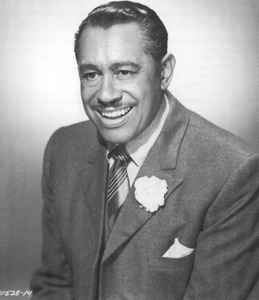 Calloway's orchestra rotated as a 'house band' with that of Duke Ellington at the famous Cotton Club in Harlem through the Prohibition era. His snappy 'zoot-suit' dress sense and skillful vaudeville song-and-dance routines made him an extremely popular entertainer. His 'moonwalking' predating that of Michael Jackson by about a half-century.

In later years he continued performing and featured in films, such as "The Cincinnati Kid" (1965) with Steve McQueen & Edward G. Robinson. The "Cab Calloway School of the Arts", in Wilmington, Delaware, was dedicated in his name in 1994. Calloway died shortly after a stroke and his ashes are interred at Ferncliffe Cemetery in Hartsdale, New York.