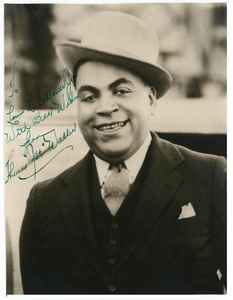 Note: Credits that either are the real surname alone (or misspellings thereof) or include the real forename (or its initial) belong to the real name profile Thomas Waller.

One of the most popular jazz performers of his era.

Thomas Wright Waller was the youngest of four children born to Adaline Locket Waller and the Reverend Edward Martin Waller. He started playing the piano when he was six and graduated to the organ of his father's church four years later. At the age of fourteen he was playing the organ at Harlem's Lincoln Theater and within twelve months he had composed his first rag. Waller's first piano solos ("Muscle Shoals Blues" and "Birmingham Blues") were recorded on October 1922 in Race Records when he was 18 years old.

He was the prize pupil, and later friend and colleague, of stride pianist James P. Johnson. Fats Waller was the son of a preacher and learned to play the organ in church with his mother. Overcoming opposition from his clergyman father, Waller became a professional pianist at 15, working in cabarets and theaters. In 1918 he won a talent contest playing Johnson's "Carolina Shout", a song he learned from watching a player piano play it.

Waller contracted pneumonia and died on a cross country train trip near Kansas City, Missouri on December 15, 1943, after making a final recording session with an interracial group in Detroit that included white trumpeter Don Hirleman. He was on his way back to Hollywood for more film work, after the smash success of "Stormy Weather". Coincidentally, as the train with the body of Waller stopped in Kansas City, so stopped a train with his dear friend Louis Armstrong on board.