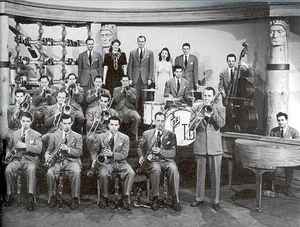 Profile:
Orchestra under the leading of Tommy Dorsey, formed in 1935 and disbanded a first time in 1946. By late 1946, the band business was indeed having problems. In December 1946, some members of the band (including Tommy Dorsey) were calling it quits. However, less than two years later, he formed an orchestra with exactly the same name (Tommy Dorsey and his orchestra), but with different members.