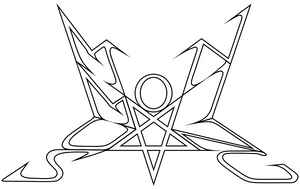 Profile:
Summoning was formed in Austria in 1993 by Protector (vocals, guitar, keyboard), Silenius (vocals, bass, keyboard) and Trifixion (drums). They are considered the parents of Tolkiean Black Metal. Two demos, "Anno Mortiri Domini" and "Upon the Viking's Stallion", were made the following year and soon the band was signed to Napalm Records where they released their first full-length album, "Lugburz", which featured Pazuzu, in 1995. After the release Trifixion was kicked out of the band and since then the band focused on keyboard elements rather than drums which was shown on the following album "Minas Morgul" which was also released in 1995.

"Dol Guldur", the third album, followed in 1997 and once again the lyrics were inspired by Tolkien themes. The EP "Nightshade Forests" was also released that year and contained songs that didn't make it on "Dol Guldur". After two years silence the band then released "Stronghold", which featured Tania Borsky, in 1999. "Let Mortal Heroes Sing Your Fame" came in 2001 and was followed by the EP "Lost Tales" in 2003.

In 2006, Summoning released their 6th full-length album with the sort title "Oathbound". Summoning changed the guitar style and moved to a more opened, floating style in contrary to the staccato style of the album and used more choirs than before.

In 2011, Silenius got a heart infarction which nearly brought Summoning to an end, but with the psychical rehabilitation a new flame arose and Silenius started to compose new material along with Protector. In the year 2013, seven years after the last output, "Old Mornings Dawn" saw the light of day. The music of OMD got a much clearer sound, focusing more on details than before. The guitars got deeper and became more old school black metal styled than on all albums before.
Sites:
Bandcamp, summoning.info, Facebook, summoning.yuku.com
Members:
Michael Gregor, Richard Lederer, Trifixion Of The Horned King