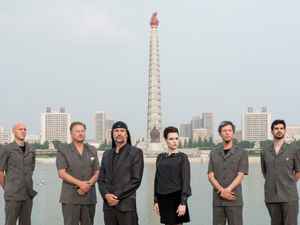 Initially one of the founders of Martial Industrial music, they changed their musical direction to a more Rock-, Pop- and Techno-/Dance-inspired crossover style in later years.
In 2015 Laibach played two shows in North Korea, making them the first 'western' band to perform there.

The band's official members are: Dachauer, Eber, Keller (2) and Saliger.

January 4, 2021
Had a great sound all their own, (saw them live on the Opus Dei tour in '87), then they started down the techno road around 1990 and that is where they lost it for me - sounding just like any other shit techno around at the time.....then there's "The Sound Of Music" - novelty-artsy-fartsy-utter-shit !
Reply  See 3 replies Notify me 2 Helpful

April 1, 2020
Ervin Markošek was also part of the member of Laibach. Why he is not on the base ex members?
Reply  See 3 replies Notify me 1 Helpful

April 23, 2019
Someone took the pains to write down the lyrics of Perspektive, which are said to be Laibach´s manifesto:

Laibach takes over an organisational system of work, after the model of industrial production and totalitarianism, collective spirit, identification with ideology, which means: not the individual, but the organisation speaks. Our work is industrial, our language political. Laibach is a recognition of time universality. Its organisational activity is an intense agitation and a constant systematic propagating, ideological offensive. Any social activity affects the mass. Laibach functions as a creative allusion of strict institutionality, identification with institution, as stock theater, or popular culture with a centralized programme. One transmitter and a multitude of receivers, and with a communication through uncommunication. Laibach's musical approach is a move to the area of pure politicization of sounds as a means of manipulating the masses. When, in politically and economically complicated situations, the antagonism in society is becoming strained, only force remains as the ultimate ratio of social integration. The force must adopt the form of systematic, physical and psychic terror, organized in accordance with social relations. Terror is obtaining a function of productional power, which extorts discipline and an adaptation of the mass, to the existing productional relations, and the existing productional apparatus. For the totalitarian form of government, the systematic terror becomes a constitutional instrument of authority. Through the mystic, erotic-mythological sound, constitution of an ambivalence between fear and fascination, which rudimentarily affects the consciousness of people, through stage performances of ritualized demonstration of political power, and through other manipulative means of an individual, Laibach practices a sound force, in a form of systematic, psycho-physical terror as social organisational principle, in order to effectively discipline and raise a feeling of total adherence bond of a certain, revolted and alienated audience, which results in a state of collective aphasia, which is the principle of social organisation. In this sense, the function of Laibach, sound constructions, and of rock concerts is to challenge collective emotions and automatic associations, and as such it serves as the means of working stimulation. By darkening the consumer's mind, it drives him into a state of humble contrition and total obedience, self-sacrifice, by destroying every trait of individuality, it melts the individuals into a mass, and mass into a humble, collective body. The dualism of Laibach's message, perception and receiver's structure uncovers the social neurosis. Laibach unites the biters and antagonists into an expression of static, totalitarianism cry. Our basic inspiration, ideals which are not ideals to their form but the material of Laibach, manipulation of self, remains an industrial production: art of the Third Reich, totalitarianism, taylorism, bruitism, disco. Disco rhythm, as a regular repetition, is the purest, the most radical form of the militantly organised rhythmicity of technicist production, and as such the most appropriate means of media manipulation. As an archetypal structural basis of the collective unconscious in a worker mass, it stimulates automatic mechanism, and shapes industrialization of consciousness, which is necessary in the logic of massive, totalitarian, industrial production.

I saw Laibach sometime in the late '80s. First of all a massive bloke in a string vest came on and chopped a large log with an axe for several minutes (he was their coach driver, apparently). Chips of wood were flying everywhere. Then the band came in and joined in the rhythm. Can't remember anything else about it apart from that.
I've got several of their albums and singles but don't seem to listen to them much. Having said that - they were a brilliant band and sublime concept.
They came in for an interview at the radio station I worked in. I didn't do the interview but the woman who conducted it said they were very funny.

August 2, 2017
I think in the beginning they did so many right moves in creating a martial imagery and a dystopian version of pop tunes, but for growing as a band, they should have made the next step and writing more great songs instead of becoming a sort of cover band...
Reply  See 2 replies Notify me 2 Helpful

March 31, 2004
Here is it. one of the industrial mastermind of all times truly a legend. Laibach gave music another approach. Laibach dare to confront listener with the mythology of history through the art of electronic music.
truly a vanguardist even today. their music and ideas conformed the roots of what now is considered "martial industrial or military industrial".
their works are so varied and absolutely impredictable that are really hard to explain.
from extreme noise to sampling from sampling to intelligent techno and back again. their best works are considered by many their bombastic assaults of machinery and orchestation. their later works are more subtle and less anthemic.