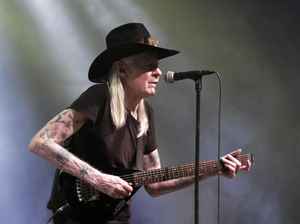 His first instruments were the clarinet and the ukulele, settling on guitar by age eleven. Something of a musical child prodigy, he grew up in Beaumont, Texas, on a diet of blues and rock 'n' roll. As a teen, nearly every weekend he would hitch-hike to Louisiana to play in small night clubs. After a short college stint, he gave up his academic pursuits and devoted himself to creating music.
He signed a five year contract with Columbia Records in 1969 (for $300,000) and the rest is history. Before signing to Columbia he recorded one album (two if you consider 'First Winter' als a proper album) and lots of singles, under his own name or as sideman. These have been repackaged and compiled at infinite.