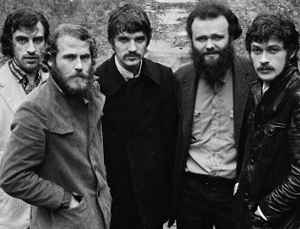 Gradually coming together from 1960 to 1964 as Ronnie Hawkins' backing band The Hawks (2). Upon leaving Hawkins in 1964, they were briefly known as Levon And The Hawks. In 1965, they released a single under the name Canadian Squires.
In late summer 1965, Bob Dylan was looking for a backup band for his first U.S. "electric" tour, & Levon and the Hawks were recommended by blues singer John Paul Hammond.
Sessions with Dylan ended in October 1967.
Stories vary as to the manner in which they ultimately adopted the name "The Band.", but by 1968 with the release of their first album, Music From Big Pink, they were performing officially as The Band.
From 1968 to 1975 The Band was one of the most popular and influential rock groups in the world, with the magazine Rolling Stone lavishing praise on them, giving them more attention than perhaps any other group in the magazine's history.
Inducted into Rock And Roll Hall of Fame in 1994 (Performer)

The Band. Great musicians, great vocalists. It's not possible to peg them on any particular genre.
Combining elements from rock, folk, & country music, they churned out top-notch albums for a good decade during their heyday. Their softer songs make the listener reflect, & when they rock, they always brought to the table good vibes that have a certain festive feel.
An awesome Band, thanks fellows!