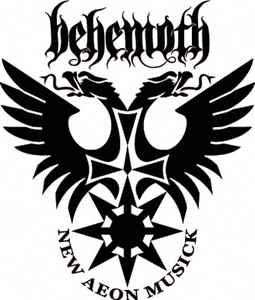 Profile:
Extreme metal band formed in 1991 in Gdańsk, Poland.
Began as a black metal band and transitioned into more of a blackened death metal band.

It was in 1991 that Behemoth was formed (initially as Baphomet) by frontman Nergal (Holocausto at that time). They released a few demos: "Endless Damnation" (1992), "The Return Of The Northern Moon" (1993) and "From The Pagan Vastlands" (1993), the latter being the material that really showed what they wanted. They signed with an Italian label Entropy Productions and released their debut mini-album entitled "And The Forests Dream Eternally" in 1994. A year later they recorded their first full-length "Sventevith (Storming Near The Baltic)". The album gave them the attention they wanted and they got a deal with the German Solistitium Records, where they also recorded and released their second album "Grom," a very experimental album, which included female vocals, synths and acoustic guitar. They also finally did a European tour where they gained stage experience and a good reputation.

In 1997 they did a split with Damnation, re-released "The Return Of The Northern Moon" and recorded their third album "Pandemonic Incantations", which featured a new drummer, Inferno.
In 1998 they got a two album record deal with Italian Avantgarde Music. They released "Satanica" 1999 and it was a huge success and secured the band tour support to Deicide and Satyricon.
In 2001 they released "Thelema.6" which gained them even more fame and led them to the European tour X-Mass Festivals, Wacken Open Air, With Full Force, Inferno Festival, Mystic Festival, Mind Over Matter etc....
In 2002 they started work on their 6th album. They gave it the title "Zos Kia Cultus (Here and Beyond)". One of their most impressive albums to date (the band had spent almost 700 hours making it). And again, a lot of tours followed. The music style on "Thelema.6" and "Zos Kia Cultus" can be characterized as death metal with industrial influences.
In 2003 they released the EP "Conjuration".
In 2007 band released "The Apostasy," which showed the further evolution of Behemoth's music style, and established the band's "visit card" - famous "blackened death metal" style.
In 2009 the band signed to Nuclear Blast and subsequently released "Evangelion," which was heavily supported with massive worldwide touring.
In 2014 Behemoth released their 10th full-length album "The Satanist," which is also supported with worldwide touring, including the scandal-famous Russian Satanist tour.
In 2018, they released their 11th album titled "I Loved You At Your Darkest".
The following years (2018-2021) brought up some EPs ("O Pentagram Ignis", "A Forest") and two live albums ("Messe Noire" and "In Absentia Dei").

March 2, 2019
Anyone have the 2018 Back on Black colour reissues? What's the audio quality like? Pretty hesitant with this label. Thanks!