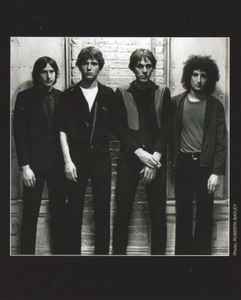 October 26, 2009
Television was formed in 1973 by Tom Verlaine (vocals, guitar), Richard Hell (bass, vocals), Billy Ficca (drums) and Richard Lloyd (guitar, vocals), and the successor to a series of groups led by Verlaine and Hell, who had met while at school together during the `60s. Verlaine, born New Jersey (real name Miller), and Hell from Kentucky, (real name Myers), were flung together due to their similar artistisc tendencies, and their school friendship in Delaware culminated in them running away together. They were discovered by police in Alabama after a fire they had started -to keep warm one night- got out of control. Having found that formal education was not very much to his taste, Verlaine decided to move to New York in August `68.
Verlaines`s musical aspirations prior to his move had centred on piano and saxophone, the latter played in a free-form jazz style but he began to play guitar in New York while working in a book store during the day. In 1971 he decided to try to make his mark in rock & roll, forming a group called the Neon Boys, a three-piece featuring himself, Richard Hell and Billy Fica, an old friend from Delaware who had been a jazz drummer for several years. Apparently this was the period when Dee Dee Ramone auditioned for a place in the band, but according to Verlaine, he "didn't know a G chord from A. We had two songs back then with just three straightforward chords apiece, and he couldn`t figure out where the hell they were!"
Even without Dee Dee, the Neon Boys didn`t last very long, nor did the same trio`s next stab at fame, Goo Goo. When that folded, Ficca went off to join a blues band, while Verlaine played solo gigs around New York. At one of these, Richard Lloyd,a New Jersey resident with a passion for the blues, saw Verlaine, and the two got together to form a band with Richard Hell and Billy Ficca, who was recalled.
There are several reasons quoted as to why the group decided to call themselves Television. The most obvious is that Tom Verlaine`s initials are TV, but New Musical`s Express`s Nick Kent feels that the name was Richard Hell`s idea. "He envisioned a whole spectacle: a torn`n`frayed four-piece fronting a bank of old television sets." Yet a third reason was contributed by Richard Lloyd: "It just seemed to fit `cos it`s something that`s in every home in America. It`s so obtrusive, it`s unobtrusive."
The band`s first performance was at the Townhouse Theatre in New York in march 1974, and the band subsequently picked up a following, culminating in Verlaine convincing the owner of CBGB`s club that he should present live music, and thus finding a home for a large number of New York New Wave bands who needed somewhere to try out their music in front of a fairly receptive audience. Also around this time Richard Williams, then an A & R man for Island Records, produced some tapes of the band in collaboration with Eno, but the band were not satisfied with the results, and neither were Island, so the opportunity was lost.
Verlaine and Hell seemed to have great things going for them visually, but not, according to Verlaine, musically. He said of Hell, "We let him play with us and we hoped he`d improve musically as we developed. Eventually we decided that we needed someone better." In mid-`75, Hell left the band, subsequently joining Johnny Thunders in the Heartbreakers, and later forming his own band, the Void-Oids. At the same time, Verlaine was living with Patti Smith, and Tom played guitar on one of her earliest recordings, Hey Joe, and contributed both in composition and playing to Break It Up on Smith`s Horses LP, as well as writing a slim book of poetry with her called The Night. In turn, Patti bought the first real guitar that Tom had ever possessed from her advance royalties.
Hell´s replacement was Fred Smith, who had previously been in The Stilettoes and Blondie, and late in 1975, the now-settled four-piece Television recorded a single titled Little Johnny Jewel on the Ork label, named after their ex-manager, William Terry Ork, to whom the band eventually dedicated their first album. The single sold astonishingly well considering that it was released on a virtually unknown label and came to the attention of Elektra Records, who were very quick to sign the group, and rush them into a studio with noted engineer Andy John co-producing with Verlaine. The album, Marquee Moon, released in 1977 was received ecstatically by the critics, one of whom called it "a 24-carat inspired and totally individualist creation."
The album crashed into the British charts within weeks of release, a particularly strange occurance as they had never played in the country at the time. Later in in `77, the group played a highly successful tour of Britain. Following this a single taken from the album, Prove It, also went straight into the Top 30.
Televison created a perfect blend of the best of American rock music of the `60s, including the Velvet Underground, Love, The Doors etc., but with an added ingredient that belongs only to Tom Verlaine, whose songs were destined to quickly achieve classic status.
Reply Notify me 17 Helpful