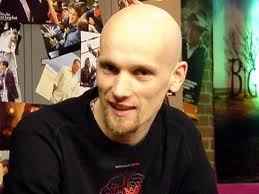 Profile:
Robert Westerholt (born 2 January 1975, Waddinxveen, South Holland, Netherlands) is a Dutch musician, known as the guitarist, backing vocalist and co-founder of the symphonic metal band Within Temptation. He also writes music for the band along with his partner and band vocalist Sharon den Adel. He used to work in human resource management before his career with Within Temptation.

In 1992, Westerholt formed the band The Circle (4) with future Within Temptation keyboard player Martijn Spierenburg, and he began writing his own music. The Circle's first demo, entitled 'Symphony No.1' was finished in December 1992. At this point, The Circle had a complete line-up, composed of Westerholt, Martijn, Jeroen van Veen (Within Temptation's bassist), Arjan Groenedijk and Ernst Van Der Loo, although Arjan and Ernst both left the band a while later. In a 1994 compilation album released by DSFA Records two songs, "Broken Silence" and "Frozen"by The Circle were featured. Soon afterwards, Westerholt left The Circle, and the band was renamed as Voyage (14). Voyage released their only album 'Embrace' in 1995, in which Sharon den Adel collaborated on the track "Frozen".

After leaving The Circle, Westerholt began writing more music for a new musical project with his girlfriend, Sharon den Adel. Westerholt sent demo versions of their songs 'Enter' and 'Candles' to former Voyage bandmate Jeroen Van Veen, who then left Voyage to join Westerholt's project, along with Michiel Papenhove. Their first drummer was Richard Willemse, who left and was replaced with Dennis Leeflang, with whom Within Temptation recorded their first demo. He left soon afterwards, and was replaced with Ivar de Graaf. Westerholt recalls that "we always had a little bit of a drummer problem, leaving and coming back again...". By 1997, their line-up had been completed, with Sharon (vocals), Westerholt (guitars and vocals), Westerholt's brother Martijn (keyboards), Jeroen (bass), Michiel (guitar) and Ivar (drums). In the same year, Within Temptation were signed to DSFA Records and released their debut album, Enter.