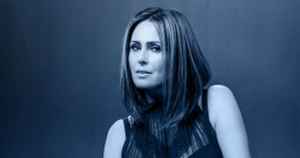 Real Name:
Sharon Janny den Adel
Profile:
Dutch singer and songwriter. Lead vocalist of Dutch gothic/symphonic metal band Within Temptation.
In November 2017, she announced a solo project under the name of My Indigo.

Born 12 July 1974, in Waddinxveen, South Holland, Netherlands. She traveled extensively in her youth, living in at least ten different countries, including Indonesia, where she lived from the time she was a year old until she was six years of age. From the age of 14, she performed with various bands, including a blues rock band called Kashiro. During high school Den Adel met Robert Westerholt. In 1996 they came to form a band called The Portal, though the name was changed to Within Temptation before their debut recording.

Den Adel never formally studied singing and stated in a 2006 interview that she had sung a short while in a choir and was mostly self-taught. She used to practice alone three or four hours per day. Den Adel has a mezzo-soprano range.

Sharon den Adel has performed on-stage and in the studio with several notable artists, including Armin van Buuren, After Forever, Heideroosjes, OOMPH! and Delain. She sang the part of Anna Held in Tobias Sammet's Avantasia projects, and the part of the Indian on Ayreon's rock opera Into The Electric Castle (A Space Opera). She sang the vocals of one Timo Tolkki song, "Are You The One?", co-wrote and provided the vocals for the track "In And Out Of Love" from Armin van Buuren's 2008 album Imagine, and sang on the track "No Compliance" for Delain's album Lucidity, as well as working with the band Voyage on the track "Frozen" (not to be confused with the Within Temptation song of the same title).