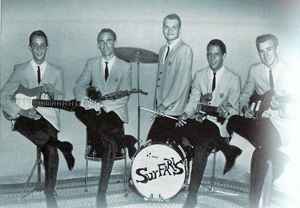 Profile:
American surf rock band formed in 1962. Perhaps best known for two of their hit songs "Wipe Out" and "Surfer Joe". They eventually abandoned beach and hot-rod themes for a more folk rock style and had a number two hit in Japan with the song "Karen".

Bob Berryhill's tenure in the original band was from 1962 to 1966 and again from 1982 to 1983. He reformed another faction of the band called simply 'Surfaris' in the 1990's with his wife Gene, a concert violinist, playing bass guitar, their younger son Joel as the drummer and their eldest son Deven on guitar. They have released new material as this line up featuring surf rock done in a Christian style.