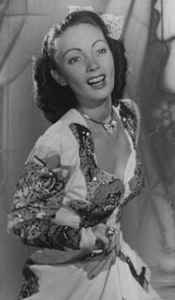 In her early career she worked in the Kelly Sisters trio and in Hal Thomas' orchestra. She sang with orchestras led by Dick Stabile, Artie Shaw, and Al Donahue before she joined Glenn Miller And His Orchestra in 1941.

Kelly originally performed solo, but soon became the female lead of The Modernaires, resulting in the group becoming a quintet of four male singers and herself. She married Hal Dickinson, one of the original members of the Modernaires, shortly after joining the group. The group continued with Kelly as lead singer until 1978, when she retired in favor of her daughter, who performed as Paula Kelly Jr.
Sites:
Wikipedia, bandchirps.com
In Groups:
Al Donahue And His Orchestra, Glenn Miller And His Orchestra, The Modernaires
Variations:
Viewing All | Paula Kelly
Kelly, P. Kelley, P. Kelly, P.Kelly, Paul Kelly