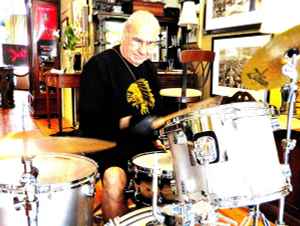 Bill Ward is the original drummer and a founding member of Black Sabbath. Prior to Black Sabbath, Ward and Sabbath guitarist Tony Iommi had worked together in a local rock band called Mythology. Ward remained Black Sabbath's drummer until mid 1980, when long standing drug and alcohol problems, exacerbated by the then recent deaths of both of his parents, forced him to leave the band mid-tour. He was replaced by Vinny Appice. A sober Ward rejoined Black Sabbath in 1983, after playing with an early version of LA rockers Max Havoc LTD, when the band recorded "Born Again" with singer Ian Gillan, but he left the band after the recording when his substance abuse problems started to resurface. Sober again, Bill rejoined Black Sabbath in 1984 when the group hired vocalist David Donato, but this line up last only a few photo sessions before Donato was fired. After that, Ward and bassist Geezer Butler left the band. Ward would vow publically not to rejoin Black Sabbath again until original vocalist Ozzy Osbourne returned, although he did fill in for a few shows in 1994 when Tony Martin sang for the band. In the late 1990's, the original Black Sabbath finally reunited to tour but any new studio recordings have yet to appear and, at this time, seem unlikely to happen. In 1997, it was anounced that Ronnie James Dio, Tony Iommi, Geezer Butler, and Bill Ward would be reuniting under the moniker of Heaven & Hell (2) but Ward stated that he would not be participating shortly after the initial announcement was made.