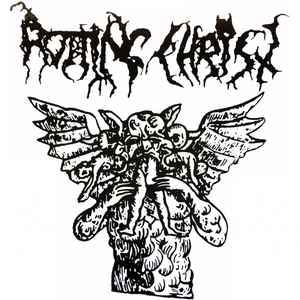 Profile:
Greek band formed in 1987 by singer and guitarist Sakis Tolis (Necromayhem), his brother Themis Tolis (Necrosauron) on drums and Jim Patsouris (Mutilator) on bass.
In 1984 Jim Mutilator formed Black Church along with some classmates but Tolis brothers joined the band after a while.Jim decided to change the band's name and Rotting Christ emerged in 1987.

At first, the trio played a roaring mixture of Death Metal and Grind. Only one year later the band recorded their first split 7″ EP with Grindcore act SOUND POLLUTION. In 1989 their first official demo was unleashed upon an unsuspecting world. This notorious five-track under the name “Satanas Tedeum” witnessed ROTTING CHRIST turning towards an incredibly dark and violent Black Metal sound. With this demo the Greeks established themselves firmly in the underground as one of the originators of the second wave of Black Metal – a fact easily forgotten in the face of later Scandinavian domination.

In 1991 ROTTING CHRIST had scored a local record deal and released their famous “Passage to Arcturo”. The EP featured NECROMANTIA’s Magus Wampyr Daoloth (as Morbid) on keyboards. With this guest appearance the Greeks clearly demonstrated once more that they have never forgotten their roots. Later in 1991, the “Dawn of the Iconoclast” 7″ followed as well as a split EP with Italian band MONUMENTUM.

Changing to an international label, ROTTING CHRIST saw their debut album “Thy Mighty Contract” appearing in 1993. This classic work defined the so-called “Greek sound of Black Metal” and gained them worldwide attention. ROTTING CHRIST took part in the notorious Fuck Christ Tour '93 with IMMORTAL and BLASPHEMY, which quickly earned them even more recognition and caused their label to release the two-track “Apokathelosis” 7” EP.

Returning for a contract to a native company for their next album “Non Serviam” soon proved an obstacle for ROTTING CHRIST. “Non Serviam” came out late in 1994, but unfortunately wasn’t largely available abroad until Season of Mist reissued it many years later. The Greeks still scored a six-album deal with a major German player in the underground. “Triarchy of the Lost Lovers” hit the stores in 1996. After a two-month European tour together with label mates SAMAEL and MOONSPELL, the band’s fame grew again. Kostas Vassilakopoulos from CORRUPTION joined as a second guitarist and eventually became a permanent member of ROTTING CHRIST. In August 1997 “A Dead Poem” continued this Greek success story. Andreas Lagios took over the duties on bass, while Xy from SAMAEL played the keyboards and also produced the album. After a headlining European tour with OLD MAN’S CHILD and SACRAMENTUM, the next album was eagerly received by fans and press in January 1998, entitled “Sleep of the Angels”. This release was followed by a massive European tour with DEICIDE, ANCIENT RITES, AETERNUS and BEHEMOTH and several shows in the USA.

In the spring of 2000, Sakis self-produced the next album titled “Khronos” at the Swedish Abyss Studio in close collaboration with Peter Tägtgren from HYPOCRISY. After yet another successful tour, ROTTING CHRIST spent their next year and a half in retreat. The band dedicated themselves completely to the creation of their seventh studio album “Genesis” (2002) and the live DVD "Live in Vienna" in 2003. Recorded in Stage One Studio with Andy Classen (HOLY MOSES), “Genesis” was a dark and harsh album, but not without the melodies and the classic Heavy Metal vibe the Greeks had incorporated into their music during the late nineties. The same feeling still emerges from the “Sanctus Diavolos” album (2004). At this time Kostas Vassilakopoulos left ROTTING CHRIST and was replaced on guitar by George Bokos.

Despite the long and productive cooperation with their previous label, ROTTING CHRIST felt the need for a change and signed to Season of Mist. In January 2006 Season of Mist re-released the band’s early classics “Passage to Arcturo” and “Non Serviam” in a 2CD set including bonus material. One year later, “Theogonia”, the first album for their new label, scored a massive hit. This rare gem gained them highest accolades from critics and fans alike. The Greek Black Metal veterans added an unmistakable native element to their sound, which gave their tenth release a very distinctive and individual twist. As “Theogonia” climbed high in many top lists of 2007, the career of the Greeks reached a new peak, which also led to a high demand of their anniversary live DVD “Non Serviam – A 20 Year Apocryphal Story” in 2009.

It is common knowledge that a masterpiece can hardly be surpassed. Yet ROTTING CHRIST performed this close to impossible feat: in February 2010, “AEALO” strengthened all the features that made its predecessor so glorious. The Greeks drew heavily from their country’s ancient heritage and then went to translate this rich history into the universal language of Metal. Their distinct sound and riffing was transformed by traditional female lamenting choirs and ancient reed pipes as well as folkloristic melodies and rhythms into something fresh and fascinating. ROTTING CHRIST invoked their brotherhood in spirit with equally individualist groups like PRIMORDIAL. This bond was illustrated by a stunning guest performance of the Irish band’s vocalist Alan A. Nemtheanga, while a no less amazing contribution came from Greek-American diva extreme Diamanda Galas in a cover version of her own “Orders from the Dead” song.

“AEALO” was a musical conjuration of the spirit of the past. The inner eye witnessed Homer’s heroes clad in golden armour performing mythical feats before the gates of mighty Troy. It saw that host of Greek freemen among them those 300 Spartans under king Leonidas holding out against a far superior force of Persian invaders. The very ground seemed to shake with Alexander the Great marching his victorious Macedonian phalanxes as far as India. It was such feelings that Sakis evoked within the concept of “AEALO”. He portrayed the loneliness of a warrior, his raging anger, sad grief and final despair, which were captured in the atmosphere and essence of this album. Far from delivering an exercise in exuberant patriotism and false heroism, ROTTING CHRIST touched the universal sorrow behind human warfare, when brother fights brother and neighbor turns against neighbor.

KATA TON DAIMONA EAYTOY” means “Do What Thou Wilt” and according to the infamous English occultist Aleister Crowley (1875–1947) this “shall be the whole of the law” of the coming Æon of Horus. This album takes the musical and lyrical concepts that ROTTING CHRIST have developed on their two previous releases “Theogonia” (2007) and “AEALO” (2010) another step further. Mastermind Sakis Tolis creates mystical atmospheres by delving deep into ancient secrets and myths from the Sumerians, Incas, Persians and other cultures. ROTTING CHRIST skillfully vary their highly individual sound with female vocals, piano, bagpipes, horns and by other means. The excellent songwriting of “KATA TON DAIMONA EAYTOY” is extremely confident and displays a maturity and perfection born out of long years of composing and experience. This band knows exactly what it is doing. In combining Metal and cultural heritage, ROTTING CHRIST remain true to the Black Metal roots of their founding in 1987. “KATA TON DAIMONA EAYTOY” follows the principle of “Do What Thou Wilt” as the threat leading through this amazing album, which makes Sakis’ universal claim even more visible. His lyrics on the album are inspired by ancient cultures, myths and folklore from all around the world. ROTTING CHRIST return to mankind’s eldest verse epic with the Sumerian “Gilgameš”. They visit the Incas by quoting from the sacred hymns of emperor Pachacutec in “P’unchaw kachun – Tuta kachun”. A tale is spun about the undead Russian water spirit “Русалка”, which lures men and children into a wet grave. The voice of ancient Persia speaks through “Ahura Mazdā-Aŋra Mainiuu”, while “Cine iubeşte şi lasă” offers the Greeks’ interpretation of a Romanian folk classic. The latter song is colourfully realised with the stunning vocals of Suzana Vougioukli and Eleni Vougioukli on piano demonstrating the wide range and diversity that make this album so special. Dive deep into “KATA TON DAIMONA EAYTOY” to celebrate and witness its wonders!
Sites:
rotting-christ.com, Facebook, YouTube, Twitter, Last.fm, MySpace, Bandcamp, bandsintown.com
Members:
Andreas Lagios, George Bokos, George Emmanuel, George Zaharopoulos, Georgios Tolias, Ignacio Blanco, Jim Patsouris, Kostas Vassilakopoulos, Sakis Tolis, Themis Tolis