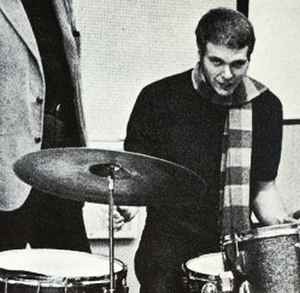 Not to be confused with multi-instrumentalist Jim Gordon (2) who was a later member of Delaney & Bonnie & Friends, playing piano and organ on their 1970 album To Bonnie From Delaney after Jim Gordon had left the ensemble.

Jim Gordon began as a professional drummer with the Everly Brothers in 1963 and was a popular session drummer in Los Angeles, recording with Mason Williams on the hit "Classical Gas", "Pet Sounds" with The Beach Boys, "Gene Clark with the Gosdin Brothers" and "The Notorious Byrd Brothers" with The Byrds in 1968. He was a member of Delaney & Bonnie & Friends during their 1969 tour in which participated also Eric Clapton.

Gordon became widely known for his drumming skills in Clapton's 'super-band' Derek & The Dominoes and co-writing the hit single "Layla" with Clapton, which was taken from the 1970 double album. He also laid down some notable tracks in 1970 on Dave Mason's album "Alone Together" and worked with Dr. John on "Sun, Moon & Herbs" in 1971.

He was also the highly-acclaimed drummer for Frank Zappa, touring on the Grand and Petite Wazoo concerts through 1972 and featured in Zappa bands on the albums "Apostrophe (')" in 1974 with Jeff Beck, "Imaginary Diseases" in 2006* and "Wazoo" in 2007*. A 1973 version of The Shadows hit "Apache" by the Incredible Bongo Band features a long percussion break by Gordon that has been sampled countless times on rap, dance and hip-hop releases. During 1973, Gordon became the drummer for the Souther-Hillman-Furay Band.

However, Gordon had progressively led a troubled life since the late 1970's, not only hearing voices in his head, but also indulging heavily in alcohol and recreational drug-use. Much to Zappa's displeasure, Gordon was busted for drugs prior to a Wazoo concert and had to be replaced at the last minute. His schizophrenic condition remained undiagnosed by consultants. Tragically, on June 3rd 1983, he killed his mother with a hammer- believing her to be some form of devil taking over his life. Gordon was sentenced to second-degree murder and given sixteen years to life in San Luis Obispo, Atascadero State Hospital (ASH) in Atascadero, and remains incarcerated in the State Medical Corrections Facility in Vacaville, USA.