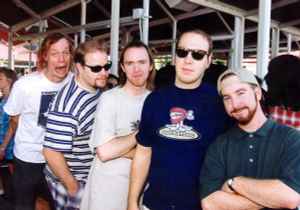 Profile:
American hardcore and crossover thrash band founded in Bergenfield, New Jersey in 1986 and disbanded in 1996. The band reunited in 2009 for a reunion show and remained active, albeit with a rotating lineup, through March 2014.

There is also a flexi that came out earlier than the A Boy album, with a first version of U Stink.
See notes on ABIAMW 1989.
https://www.discogs.com/Billy-And-The-Boingers-Bootleg/release/1220755

Mucky pup is not linked that is why it is only seen under bandmembers lists.