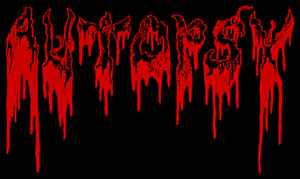 Profile:
Autopsy was formed in San Francisco in 1987 by ex-Death drummer Chris Reifert (who also does vocals). He recruited guitarists Eric Cutler and Danny Coralles and bassist Ken Sorvari. In 1988 they released the demo "Critical Madness" and got signed to Peaceville records. Two years later they released their debut album "Severed Survival". The album also featured bass tracks from Steve DiGiorgio of Sadus.

In 1991 the band released two EP's, "Fiend for Blood" and "Retribution for the Dead" and an LP named "Mental Funeral". None of these seemed to help the band, nor did the third full-length "Acts of the Unspeakable", which also featured the new bassist Josh Barohn (formerly of Suffocation). Nevertheless the album was well-known for it's disturbing coverart.

Nothing really happened with the band until 1995 where they released the album "Shitfun" which had another new bassist, Freeway Migliore. After the release the band split up and moved on to other projects, most notably Abscess (2).

In 2001 the compilation album "Torn from the Grave" was released.

Upon the 20th anniversary re-release of Autopsy's "Severed Survival" album the band temporarily reformed for a short time to record two newly written songs which were released as the "Horrific Obsession" 7" and were also included on the 20th anniversary edition of "Severed Survival". Shortly after these recordings Clint Bower left Abscess and the remaining members decided to split up and reunite with original member Eric Cutler as Autopsy again. The band wrote material for a new album which will see a 2011 release and a 5-track EP named "The Tomb Within" which was released in September 2010 on Peaceville.
Sites:
autopsydeathmetal.bigcartel.com, Facebook, reverbnation.com, Bandcamp, MySpace
Aliases:
Grave Violators
Members:
Chris Reifert, Danny Coralles, Eric Cutler, Eric Eigard, Freeway Migliore, Greg Wilkinson, Joe Trevisano, Josh Barohn, Ken Sorvari, Steve Cutler