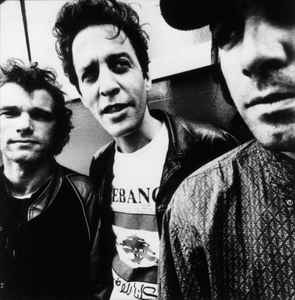 Real Name:
Morphine
Profile:
Morphine began in 1990 in Cambridge, MA, as a lighthearted experiment in darkness. The band struck a chord in the thriving local music scene, a scene that had nurtured Mark Sandman and Billy Conway's former punk-blues outfit, Treat Her Right, as well as Dana Colley's first group, Three Colors.
The band toured the world, commanding festival audiences of over 50,000 in Europe and headlining New York City's Central Park Summerstage. During a performance July 3rd, 1999 in Palestrina, Italy, Mark Sandman collapsed during the band's eighth song. He was pronounced dead in the ambulance en route to the hospital. He was 46.

Morphine were one of the most unique acts in the history of music. Combining deep, smooth vocals, jazzy/bluesy drumming and the sexiness of all kinds of saxophones, Morphine created music that sounded like nothing before it or even after. Mark Sandman was a one of a kind musician/singer with that wicked 2 string bass and that unmistakable sultry voice that could conjure up all kinds of emotion and thought. Dana Colley was a master at that brass with smokey and wicked saxophones. Jerome Deupree's / Billy Conway's drumming and percussion lead the way across sexy and dark corners giving the trio command and direction all through some seedy and often emotional lyrics. You'd be hard pressed to find anyone that achieved the originality and musical catharsis that Morphine provided the world. RIP Mark.

Has a bonus LP with unreleased tracks.
See 1 reply

March 1, 2020
Not much to add here, just another person to add their disbelief in The Night and Like Swimming still not having gotten a vinyl release... it's about time!!
See 2 replies

February 17, 2020
For the love that we hold sacred someone press Like Swimming and The Night on vinyl.

April 26, 2019
Just another passing comment begging for Like Swimming and The Night to be pressed on vinyl
See 2 replies

August 8, 2015
It is essential to his discography on vinyl reissue
See 2 replies