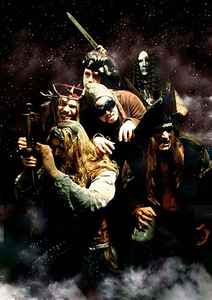 Arcturus was formed in 1990/1991 as an offshoot of the band Mortem. Founding members were Sverd (keyboards, guitar) and Hellhammer (drums), who were then joined by Marius Vold (vocals). Vold left the group after the release of "My Angel" EP in 1991. They later recruited Garm (vocals) and Samoth (guitar) and recorded the "Constellation" mini album, that was released on Nocturnal Art Productions in 1994. Samoth was forced to leave the band in 1995 due to being arrested for church burnings. Two new members, Skoll (bass) and August (guitar), were then brought into the band and they recorded their debut album "Aspera Hiems Symfonia".

In 2005 they released their studio album "Sideshow Symphonies" and in 2006 the live DVD "Shipwrecked in Oslo". On April 16, 2007, it was announced that the band would be breaking up, and more details were revealed in an official statement released on the band's website on April 17th, where the band confirmed the split.