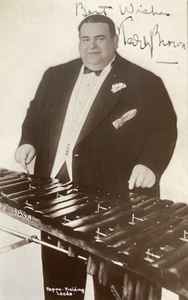 American entertainer who spent the latter part of his life performing in Britain. He first played in the New York Philharmonic Orchestra, but moved to the field of popular music in the 1920s.
Brown played several instruments, the saxophone, the drums, percussion, the xylophone, and he also whistled melodies while he played any of the percussion instruments.
Sites:
Wikipedia
In Groups:
Teddy Brown & His Café De Paris Band