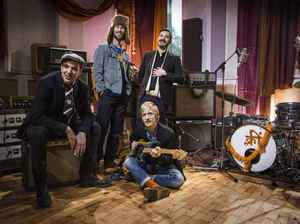 Profile:
British indie-rock band formed by Crispian Mills and Alonza Bevan whilst at college in 1988. Various lineup and name changes (previous members included one of Hayley Mills' ex-boyfriends on vocals and previous monikers the band went under included The Kays and Objects of Desire), plus thanks to Crispian's pilgrimage in 1993, they are famously tinged with an Eastern-fused sound because of Crispian's Hinduism influences.

They originally split in 1999 amid personality clashes, record company intrusion and frustration of competing against the press' infamous lynching towards Crispian after some misinterpreted quotes in 1997. Crispian went on to record a project called Pi (the material never materialised) and The Jeevas. Alonza joined Johnny Marr's band Healers (2) and formed a short-lived band with Paul Winter-Hart called Shep. Winter-Hart also joined the short-lived Thirteen:13 and drummed for Aqualung. Jay Darlington joined Oasis (2) as a live and session musician and carried on with Beady Eye when they split in 2009.

In 2002 a compilation was released entitled "Kollected", which Crispian compiled and wrote sleeve notes for. It also featured a previously unreleased Bob Dylan cover, which was also the band's final recorded song before their split.

In 2004 the band "reformed" for a one-off song "Braj Mandala" on a charity compilation album 'School of Braja' which Crispian had been creative director of, also recording two new songs with The Jeevas too. Crispian laid down the basics of the song and asked the other members individually to play their parts on it. (Jay was the only member not to be involved due to his commitments with Oasis (2)). Crispian and Alonza soon began writing together again and planned a full return. Jamming in the studio birthed the "Revenge of the King" E.P. and a supporting mini-tour in 2005.

April 14, 2022
In the same league of The Beatles & Oasis, Kula Shaker are one of the greatest act of all time!

March 3, 2018
The press hated this band and much of the fickle public were persuaded to believe that this band were capable of achieving nothing. Listen to their music with an open mind - when K was released it was cool to like Oasis (and/or Blur) and the UK was obsessed over the Spice Girls; this kind of music was proudly retro, spiritual and created by so called 'posh kids'; the album should've bombed...but it didn't - it sold bucket loads and the music magazines and radio stations hated them for it.
Despite this, the band has maintained a devoted fanbase over their stop/start career because their music is genuinely good. The level of songwriting is consistently high (although occasionally patchy in their last couple of albums) and the musicianship is excellent. I urge any newcomers to start with K and work forward - K remains their best album and in my mind of the best albums of the 1990s.
See 3 replies