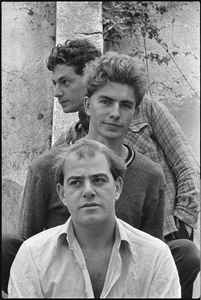 Profile:
The Gordons formed in Christchurch, New Zealand, in 1980 and were comprised of Alister Parker (Guitar/Vocals), John Halvorsen (Bass) and Brent McLachlan (Drums). With a sound both edgy post-Punk and semi-industrial, they toured and recorded throughout 1980, and in October released their first single "Future Shock". In late 1981, they recorded their first album The Gordons, which was voted album of 1981 in music magazine Ripitup, and subsequently split up. In late 1983, though, they re-emerged with Alister Parker replaced by new singer/guitarist Vince Pinker, and released their second album "Volume Two" in 1984. From late 1984 to 1986, the original line-up of The Gordons reformed and began recording material, which they later refused to release.