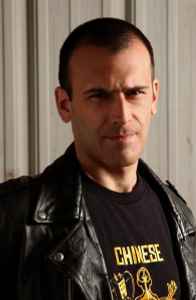 Real Name:
Ben Foster
Profile:
Founding member, vocalist, some time guitarist, and songwriter of the punk rock band Screeching Weasel. Originally from the suburbs of Chicago, IL, he current resides in Madison, WI. Ben is also a writer, having penned columns for Maximum Rock 'n Roll as well as his own self-published fanzines. He also released 2 books, one a collection of old writings and the other, called "Like Hell", a biography of a fiction punk rock band that drew from his own experiences. He was a member of The Vindictives and was vocalist, guitarist, and co-songwriter for The Riverdales. For a time, he co-hosted a sports radio show on ESPN Radio in Wisconsin and he also has his own podcast.
Sites:
MySpace, benweasel.com, mynorthwest.com, Wikipedia
Aliases:
Ben Foster (2), Cochise (8), Jimmy Spectacular, Pappy Le Pew, Teakettle Jones
Variations:
Viewing All | Ben Weasel
B. Weasel, BW, Ben, Ben Weasel And His Iron String Quartet, Ben Weasel/Screeching Weasel, Benito, Benito Mussoweasel, Benjamin Foster, Mr. Ben Weasel, Weasel, Weasel, B.

November 6, 2021
I spent almost two years living in the same house with Ben in the backwoods of Maine during the mid-80s, at a certain place which will haunt me for the rest of my life. Not sure how he feels about it, and I certainly won't try to guess. It was a very, very difficult period of life for both of us - that is one thing that I am quite sure of. In the unlikely event that he ever comes across this "review," I hope you are well, Ben. Nice work!