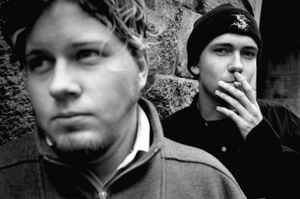 Profile:
Danish indie band formed in 1989 by Sune Rose Wagner and Jakob Jørgensen (Jakob Krogh Jørgensen) as Western Front in Sønderborg. By that time Mads Glenstrup was the bands drummer. By 1992, now as Psyched Up Janis, Wagner and Jørgensen moved to Copenhagen where drummer Martin Bjerregaard joined the band. Released the EP "I Died In My Teens" from which the title song was picked by Kerrang! as "Single Of The Week". In 1995 the band migrated to London to pursue an international career. For their 1996 second album "Beats Me" and on tour, Jesper Reginal was the drummer, though the album credits had only Wagner and Jørgensen listed as the band members. In 1998 the band released "Enter The Super Peppermint Lounge" and then moved to the US. In 1999 they released the acoustic live album "The Quiet Album" and a compilation of unreleased demo tracks "Hi-Fi Low Life". That year the band folded, giving a farewell concert at the Roskilde Festival.
Post-Psyched Up Janis Wagner formed another duo band with Sharin Foo, the New York based, highly successful The Raveonettes. Jakob Jørgensen formed the band Knallert that only released one EP - he is now a teacher, living in Copenhagen with his wife and four children. Martin Bjerregaard continued his career playing with the australian punk band The Saints (2), later with Racetrack Babies and as a live drummer for Baby Woodrose. Jesper "Yebo" Reginal is the co-owner of the very successful indie label Crunchy Frog. Beside that he is drumming for The Tremolo Beer Gut, a band he formed with Wagner in 1998.
Psyched Up Janis was reunited in april 2009 for a Søren Solkær Starbird (photographer) exhibition followed by three sold-out concerts in june that year.
Sites:
ulsmatvejledere.wixsite.com, Facebook, Wikipedia
Members:
Christian Bech (2), Jakob Jørgensen, Jesper Reginal, Mads Glenstrup, Martin Bjerregaard, Sune Rose Wagner