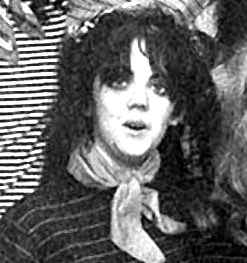 The two eventually became members of the LA groupie set along Sunset Strip in the late 1960s, where Parker met up with other wild girls in the Strip's music scene. These friends loosely performed as the Cherry Sisters, and then as a performance-art collective known as the Laurel Canyon Ballet Company at gigs led by Frank Zappa.

Then known as Miss Sparky, or Sparkie Parker, she became part of the all-girl group GTO's, an acronym for Girls Together Outrageously, produced as a side project by Zappa.

As Sparkie Parker she later performed vocals for the track Disco Boy, on the Zoot Allures album. On the CD release she is credited as Sharkie Barker.
In Groups:
GTO's
Variations:
Viewing All | Sparkie Parker
Miss Sparky, Parker, Sharkie Barker, Sparky